Hello and welcome to my site www.railwayclocks.net the one stop shop for all the things Railway clock related. I’m 58 and have for the last 32 years been involved in sales of polyurethane foam to the Furniture and bedding industries.I originally qualified as a motor technician but left that for my career in sales, I have always been mechanically able and have been featured in a few magazines recently with some of my Motorcycle restorations. My interests in Railway began as a boy with my Triang train set and this gradually evolved to collecting railway relics in my teens in the 1970’s,Totems signs lamps etc, however I always wanted a railway clock and eventually found one in the celler of the now closed Moseley Railway Museum run by the late John Mander, I asked if it was for sales as it looked a bit forlorn in that dark dank cellar, it was and a deal was done.

Curiosity got the better of me and I got hold of various books on the subject and eventually stripped and cleaned it, I then thought it would be nice to learn more and practice more and also collect more Railway clocks so over the years I bought what I could afford and liked, gradually trading up but keeping the costs low as I was doing my own restoration, money was spent on the correct tools and parts and contacts made in the general clock trade. Once I had got to the optimum amount of clocks in the collection I operated on a one in one out basis and have gradually built my business stock up. I have over 40 British Railway clocks currently in stock and can offer full professional cleaning, servicing and restoration to fit my customer’s budgets.

I also have copies of some of the official clock records so research can be done utilising these. Probably the most valuable clock I have ever owned was London Brighton and South Coast Railway No1, this was a 14 inch dial walnut cased fusee table clock supplied by Richard Webster of Cornhill London and was supplied for use in the LBSCR boardroom at London Bridge, it later was used by Sir Eustace Missenden OBE (1886–1973) who was the last General Manager of the Southern Railway and the first Chairman of the Railway Executive, he retired in 1951 and the clock was presented to him and remained in his family until 2010. This magnificent timepiece was eventually swapped for an equally rare but more usable South Eastern Railway wall clock, this swap features in the picture of me and is a unique South Eastern Railway walnut cased clock. 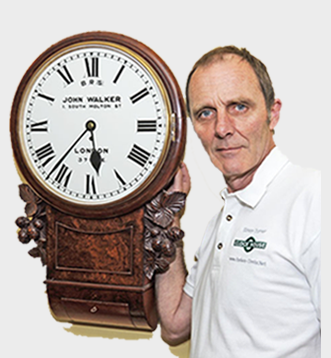